McLeod Plantation Historic Site has begun a planting project involving Sea Island cotton (Gossypium barbadense). Although varieties of this species are still grown in other places in the world, it was long believed the Sea Island cotton varieties that made the Lowcountry famous were extinct. The 37-acre property on James Island was originally purchased by William Wallace McLeod in 1851 as a Sea Island cotton plantation. The last time Sea Island cotton was grown here was in the 1920s, ending with the arrival of the boll weevil, a beetle that feeds on cotton buds and flowers.

The Sea Island Cotton Project is a partnership between your Charleston County Parks, the Friends of McLeod, local attorney and James Island resident Bill McLean, and local botanist and author of "A History of Sea Island Cotton," Richard Porcher.

Inspired by Porcher's book and the mystery of what happened to the local varieties of the cotton, McLean embarked upon a search for Sea Island cotton seed from the Lowcountry. He successfully located and acquired Bleak Hall seed originating from Edisto Island at a USDA seed repository. Looking for a convenient location to plant, he approached CCPRC about growing the cotton at McLeod Plantation Historic Site. One quarter of an acre was planted at McLeod Plantation Historic Site on May 22, 2017 in the site's former cotton fields near the main house.

Contributing to its historic significance, McLeod Plantation Historic Site was a very significant agricultural site. In 1860, enslaved families like the Dawsons, Forrests, and Gathers harvested 90 tons of Sea Island cotton, making it the most productive plantation on James Island.

“While it is exciting on one hand to have Sea Island cotton growing here once again, it is equally important to acknowledge the cultivation of this cotton was accomplished through the oppression of millions of people for generations,” said Shawn Halifax, site historian and cultural history interpretation coordinator for CCPRC. “This calls for solemn remembrance, too.” 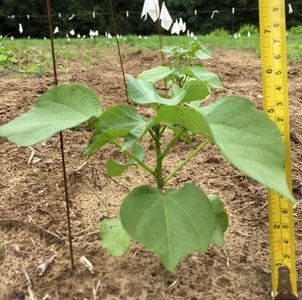